We arrived on the 1st April to oversee the launch of First Charge at D Marin in Gocek, Turkey.We had a couple of days to wait and so used it to prep as much as we could whilst she was on the hard. 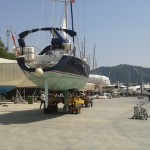 The launch went very well, the guys at D Marin in Gocek were extremely professional! We quickly packed all our victuals and gear whilst fueling up by bowser. With the engine running nicely and no issues with the stern gland or sea cocks we motored on a wind still evening to Fetiyehe to clear customs. Its required if entering or leaving Turkey to clear in and out via an official port of entry.

The process was made smoother by having one of the D Marin guys to help translate and collate the plethora of paperwork!

And so off we went! Watch the video below to see a birds eye view of our trip!

Thanks to regular forecasts from the shore team, we could be sure about taking the more direct route against the prevailing winds, NW in the Ionian Sea. Saving us 20 hours from the usual Corinth Canal Route.

It worked well and we had lovely 5-10kt South Westerlies. A comfortable and distance eating beam reach.

A quick stop over in Reggio de Calabria allowed us to fill up with fuel and calculate our exact fuel consumption. This allowed us to make more informed decisions as we set off for the second half of the trip.

After fairly constant headwinds on the North Sicilian coast, it was nice to have the breeze go aft about 30nm off the NW tip. It being a lovely day and the conditions spot on for the Spinnaker, why not give ourselves another 3kts of Speed!?

The spinny had a snuffer, so it was a simple and safe hoist.

We rounded Sardinia on a flat calm, we had another fantastic forecast. ENE for the duration of our passage over to the Balearics. We zipped into and back out of Mahon, to give ourselves a small fuel buffer. The forecast had gone soft again.

We road out the remainder of the breeze by going south of Menorca giving us a beam reach with a very flat sea. Back up to a 9kts average for the afternoon.

North of Mallorca the breeze died to nothing and all that was left was a gentle motor sail to Port Ginesta! This was a great opportunity provided by our Yacht Delivery Turkey service.

Many many thanks to Derek Middlemas for granting us the pleasure of delivering First Charge. And also to Giles Ferrier and Dave Wright my crew for the delivery, they were hard working, vigilant and above all great to have on board!